The day before last of teaching.

Yesterday we nearly had one of these "normal" camp days where nothing exceptional happens . I won my league game with 3.5 points against a Candadian 1 Dan. It was a rather exciting but we did not get a review so far. I will try to catch up and upload it all together. In the afternoon Yokota Shigeaki, 9p gave his second lecture. This time on how to handle invasions inside a sanrensei formation. In principal I highly appreciate any lecture concerning sanrensei. In practice there is the slight problem that I'm more familiar with it than the average player and therefore already read about most of the stuff Yokota-sensei showed. However I mostly remembered just the first few moves and not the complete sequences he showed so it was still interesting.

Shortly before the end of the lecture our special guest finally arrived: Yuki Satoshi, Judan. There are seven big titles in Japan. Most of the time all of them are held by professionals of the Nihon Kiin (the larger association) but Yuki was able to snatch the Judan title for the Kansai Kiin and of course also himself.
At the moment there are just three person who are holding one of the big seven. The most famous Go player in Japan at the moment, Iyama Yuta, Kisei/Honinbo/Tengen/Gosei/Oza, greedily collected 5 of the them. In fact Yuki-sensei took his Judan title directly from that player and therefore reduced him down to 5 :-)
By the way, Iyama Yuta belongs to the Kansai branch of the Nihon Kiin.
Yuki-sensei seemed like one of those important business person who are travelling around all the time. He arrived with a wheeled case since he had to go to Tokyo for a game directly after the camp visit. Shortly before, he came back from a tournament in China...


Most people took their chance to get an autograph of a title holding professional...so did I. The large kanjis on the right are hard to translate into English. Even the native speakers had problems with it. They mean something like "back to the roots", "remember the beginning" or "big dream". Apparently Yuki-sensei likes the kanji a lot he even choose them as the name for his son.

Normally we just signed up for teaching games until four people were reached but everybody wanted to play with Yuki-sensei. Therefore this time the four people playing were determined by a drawing between everybody who signed up. Unfortunately, I was not among them.


There were also regular teaching games going on. Mostly for people who have not played twice already.

Today was the beginning of our last days off. Originally I planed to go to the Osaka aquarium. However, Kim-sensei, one of our teachers had to play a professional game today. Maeda-sensei was able to convince the people at Kansai Kiin to broadcast it to the public area and so we went to watch it. Actually we were hanging around and have been playing against locals. Occasionally we took a look at Kim's game but since they have 3 hours of thinking time it's not progressing overly fast.
In the end Kim-sensei won by resignation and can continue competing in the Tengen league.
Tomorrow I will really go to the aquarium.

PS: I just happened to come by when these kids were practicing at one of these large Japanese drums in a shrine in the middle of Osaka. It was a bit surreal. 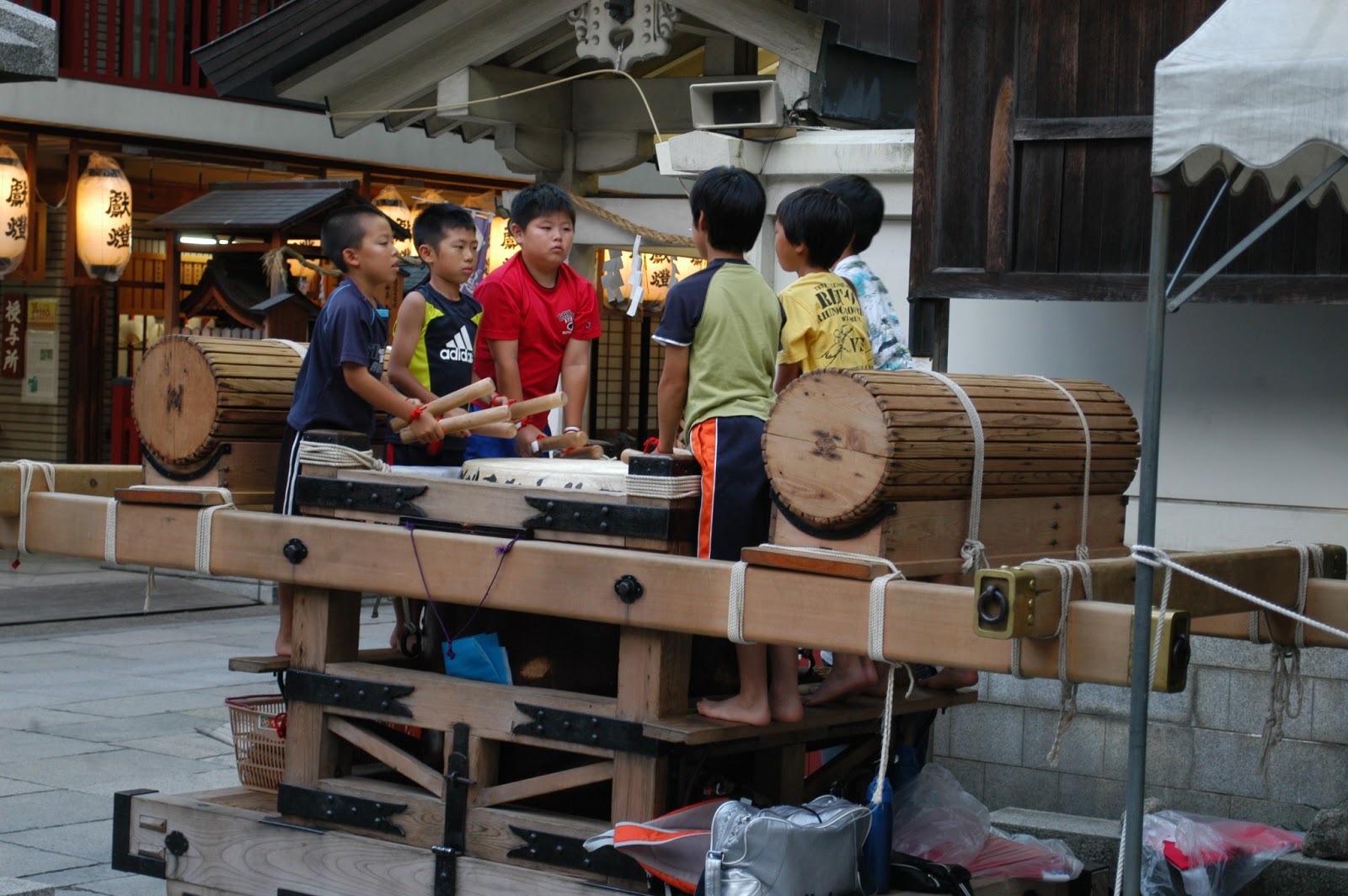