I decided to stay at the airport since my flight was already a bit delayed. At least I found almost free Wifi to write new blog posts. The good news is that I was upgraded into business class for the flight from Leipzig to Istanbul. It was a bit more comfortable and especially the food was much better than I'm used from planes. Unfortunately I forgot the first 1 hour of time difference and therefore missed the chance to drink large amounts of free spirits :-(
Now I'm sitting in an airport pub with power supply and have to buy very expensive coke.
However I would like to use the chance to present you a small tournament which is supposed to be my distraction for the rest of the evening.
It's a Super-Go tournament between France and Germany, much like the ones between Japan and China in the 1980s. There are teams of 8 players filled with most the strongest players of each country. In a few minutes the first game between Toru Imamura, 4 Dan (France) and Jun Tarumi, 5 Dan (Germany) will start. Both of them are originally from Japan but are already living for many years in Europe.
I would advise everybody who is stuck at an airport like me right now to drop by and follow the game. I'm confident it will be worth seeing.
Just connect to KGS and look for ElyseeFRA vs. ElyseeGER!

Further information about the tournament can be found there: Élysée Cup

PS: Maybe I forgot to mention this, but everybody should feel free to leave a comment whether he likes or dislikes the reports!
Posted by Jan Engelhardt at 11:28 No comments: 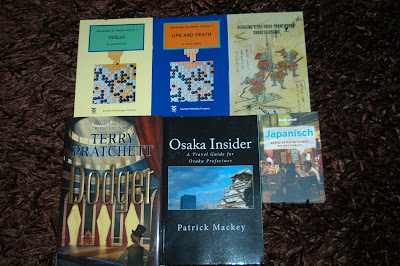 Unfortunately I do not find an appropriate translation for the German word "Reiselektüre". However I just want to briefly show what I'm going to take with me. Normally I carry approximately so many books with me that I could spend the whole stay with just reading my own books. I tried to be a bit more reluctant this time but I'm not sure if it was successful.
The two Go books "Tesuji" and "Life and Death" are quite new. I ordered them this week since I heard they are an important part of Go literature and I assume they are understandable even without a Go board in front of you. Same goes for "Reducing Territorial Frameworks".
My most recent acquirement is the Japanese language travel guide. I hope that I learn enough from it to ask for a game, or something like that. The "Osaka Insider" was a birthday present and contains a lot of information about sightseeing in Osaka.
The only non-travel-related book is the newest novel by Terry Pratchett: "Dodger". Unfortunately I had to remove it from my cabin baggage... because of the many other books already there.
I'm starting from the airport in Leipzig soon and will be flying to Istanbul first. There I will have six hours waiting time so I'm pondering if I want to make a short visit to the city centre. Otherwise I will probably be wandering around the airport looking for some free W-Lan.
The camp starts officially on Monday, so expect more posts on Go in Osaka from that day on.
Posted by Jan Engelhardt at 03:25 1 comment:

Since there will not be to much posts this week here is a small amusement for everybody dropping by. It is the final game of the 51st Judan tournament, held in Osaka. Yuki Satoshi, one of the Go camp lecturers, manged to defeat Iyama Yuta with 1.5 points. I'm sure he will be surprised if everybody knows the decisive game by heart.
Enjoy the game!

PS: By the way, I managed to include a game viewer in the blog!

Posted by Jan Engelhardt at 09:32 No comments:

Hereby I declare the opening of the official blog for the Osaka Go Camp 2013
The purpose of this blog is to keep the world informed about what's happening in the camp. Most articles will be written by myself but I will try to convice other participants to contribute their own stories, too.
The Go camp and with it regular reports will start on next Sunday. I hope you enjoy reading.
Feel free to leave a comment if you like the stories or when you have any suggestions!